We closed the month with 4.76% gains.
Let's review our biggest winners & losers of January in this post

Here's a detailed post of our trading performance in January . We will also go through all the good & bad trades that we did last month.

Little context of the market as we came into January ->
We started January on a high note as indices continued to drift into new all time highs. We then had some volatility & pullback kick in during the last two weeks of Jan as WHO declared a public health emergency. 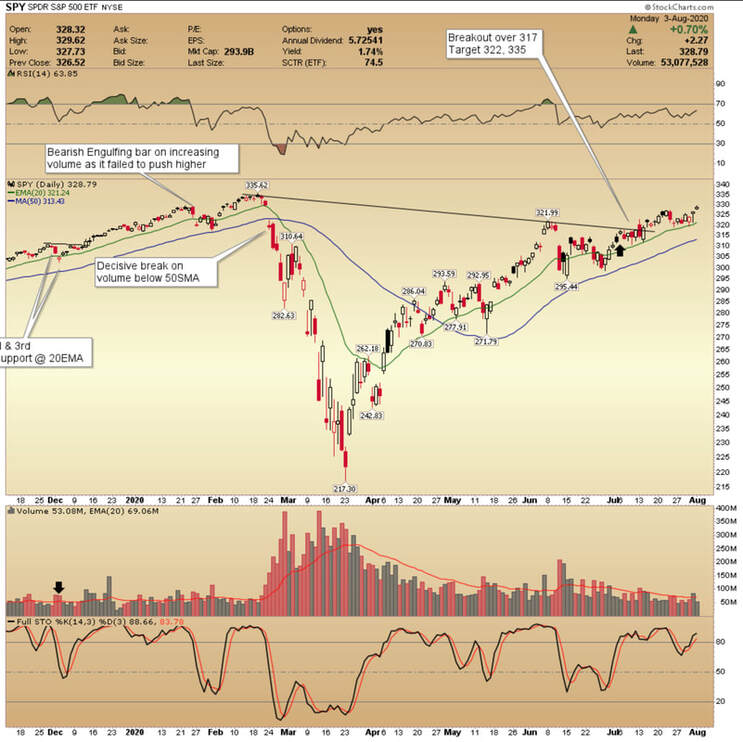 Our TradeJournal for December ->  +4.76%
First three weeks were good for us as we had multiple big winners in SHOP, BYND, AMZN , PODD & LMT. But as market pulled back during thee last week of Jan, we didn't step off the gas & continued to force on new trades which cost us dearly.
​
Jan month's performance was also largely helped by swings which we started in December - V & MSFT 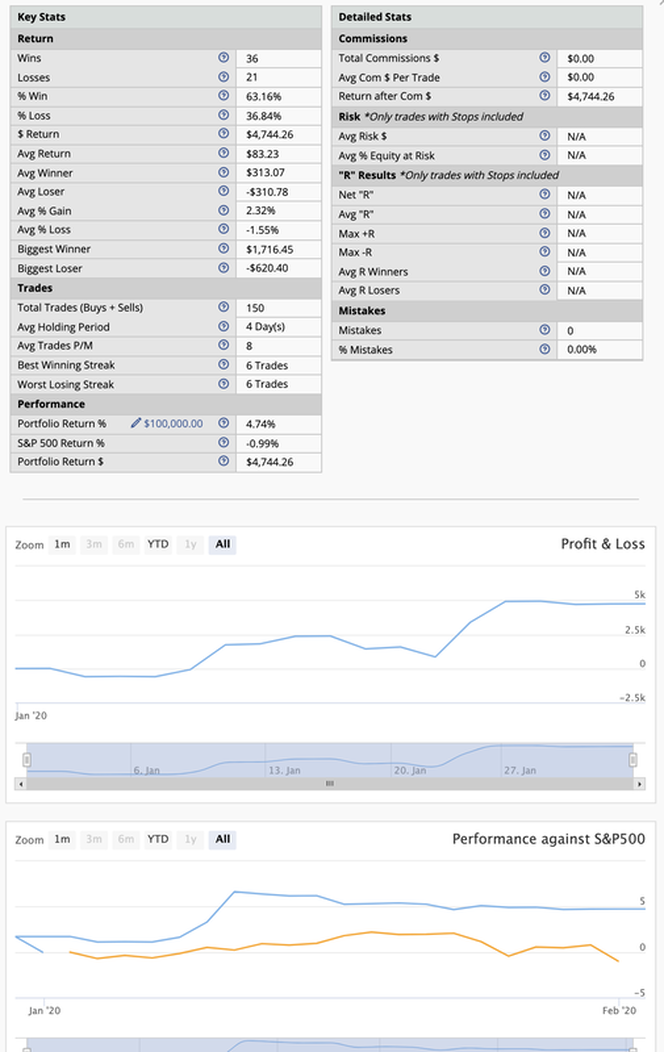 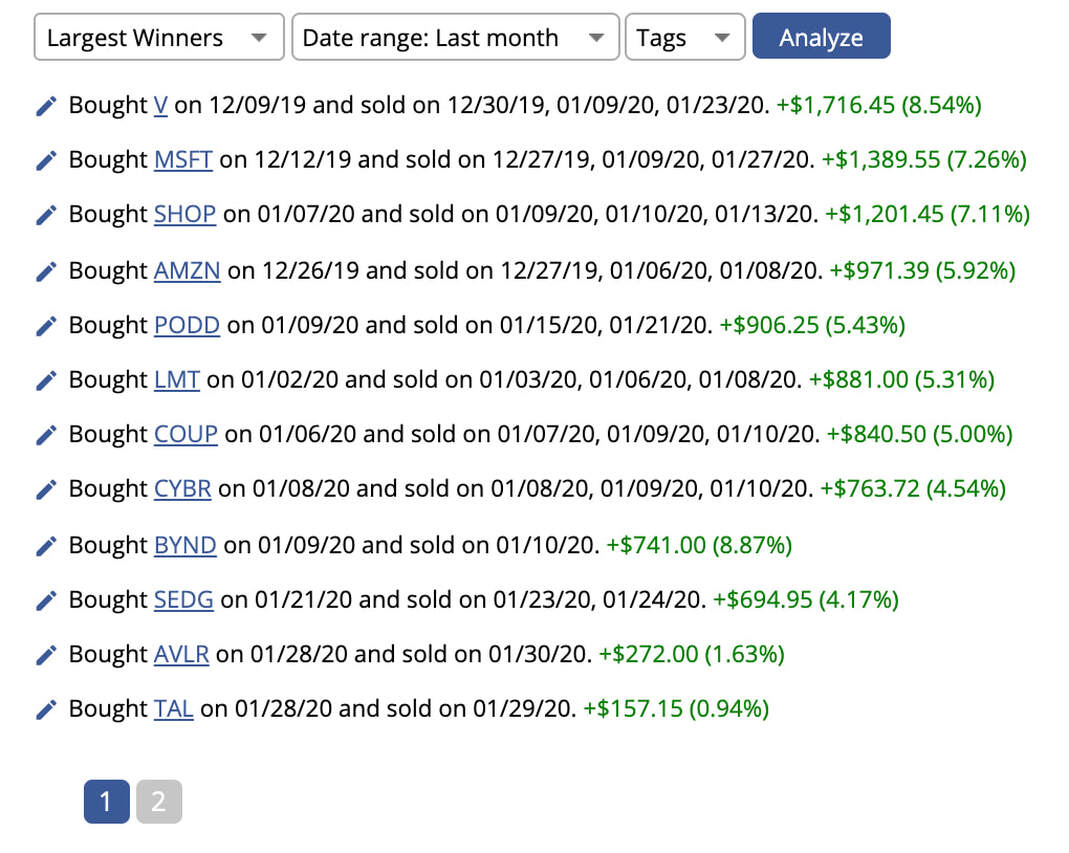 V -> 8.5% winner
This large cap & Dow stock turned out to one of the biggest leaders in December & Jan as it continued to drift with the market into new all time highs. We did a good job riding the trend once it broke out from a huge base 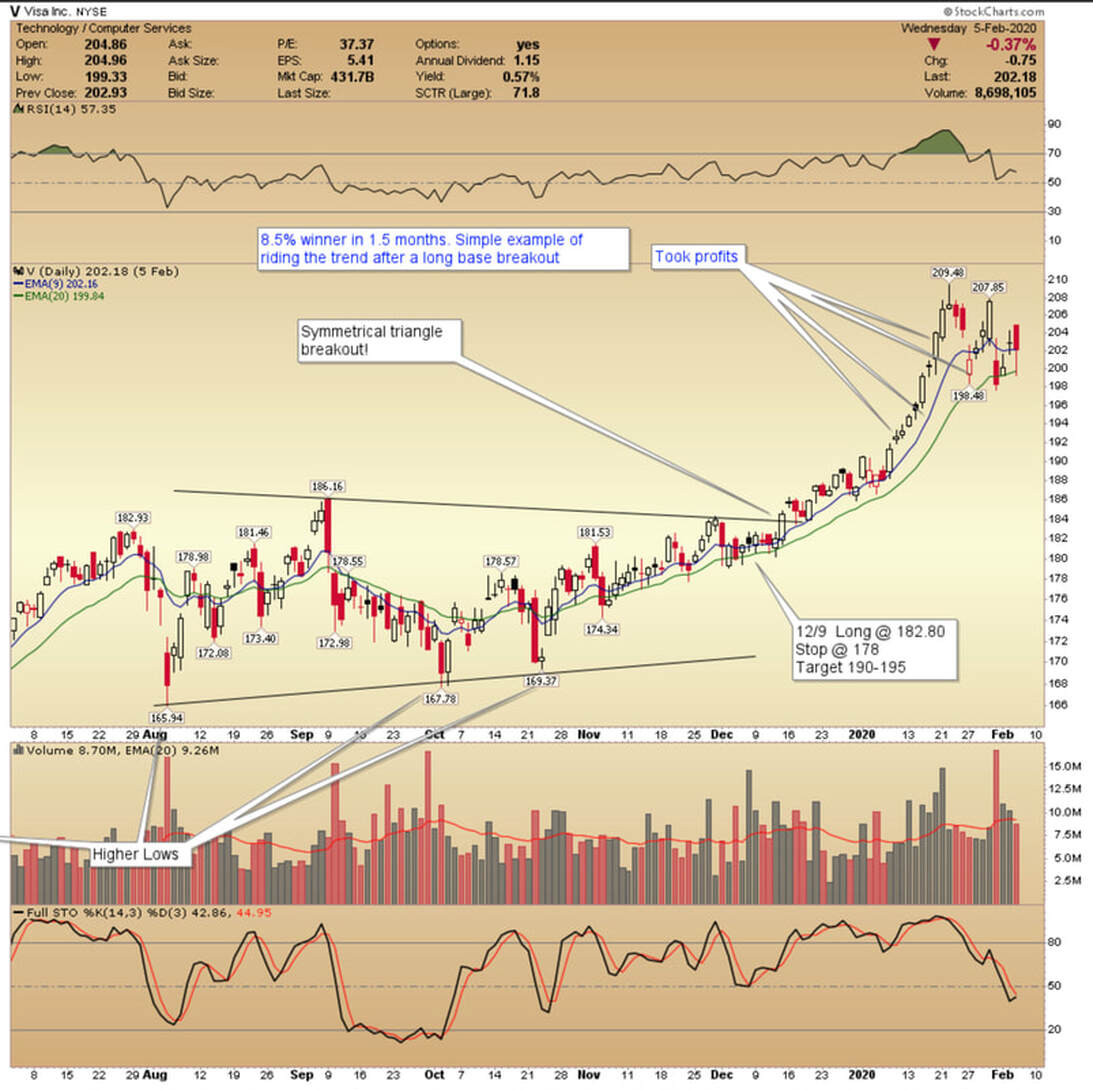 MSFT -> 7.2% Winner
Another large cap & Dow stock  that turned out to one of the biggest winners for us. We did a good job riding the trend by taking profits along the way! 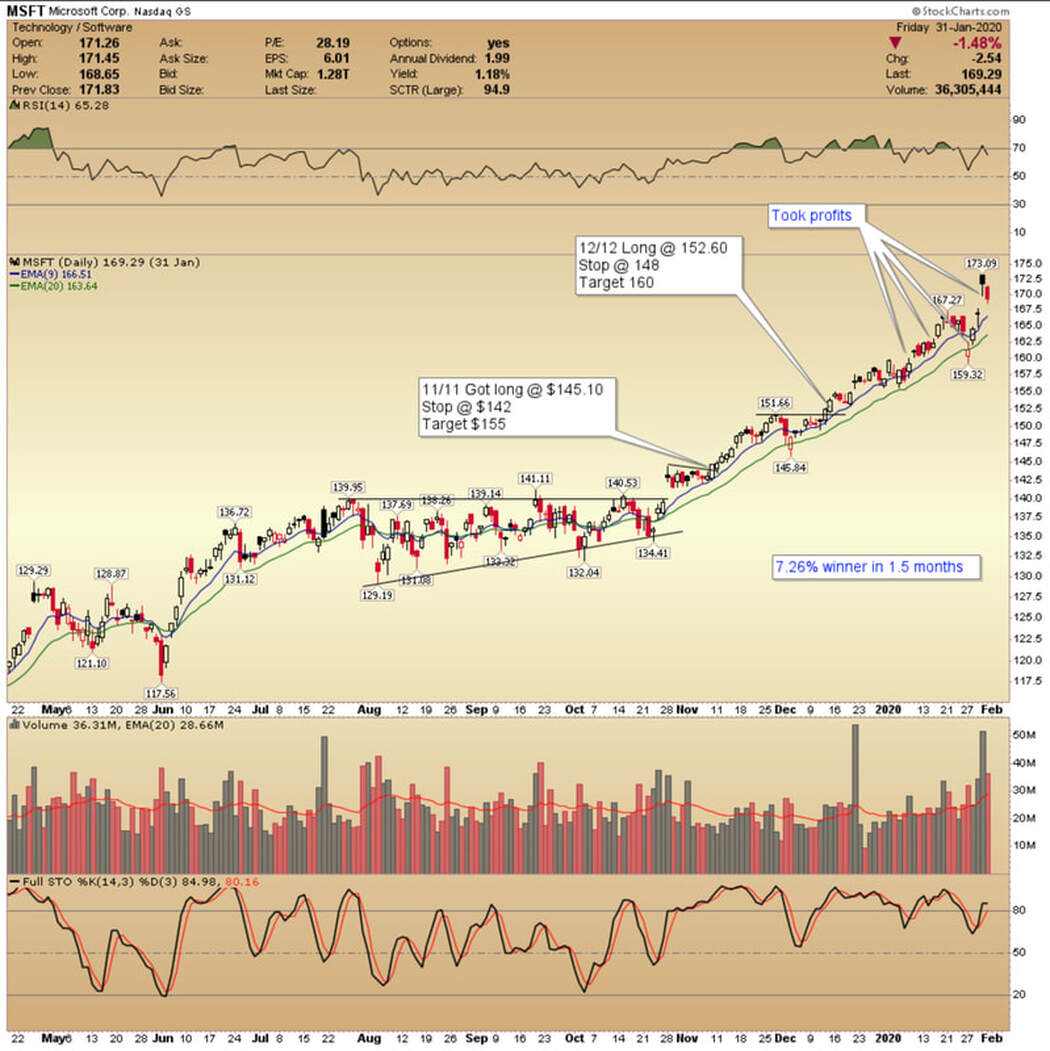 SHOP -> 7.1% Winner
We took this trade as it broke out of a huge cup & handle base. Market momentum pushed this name higher & we rode the trend by taking profits along the way. Turned out to be a perfect swing trade for us! 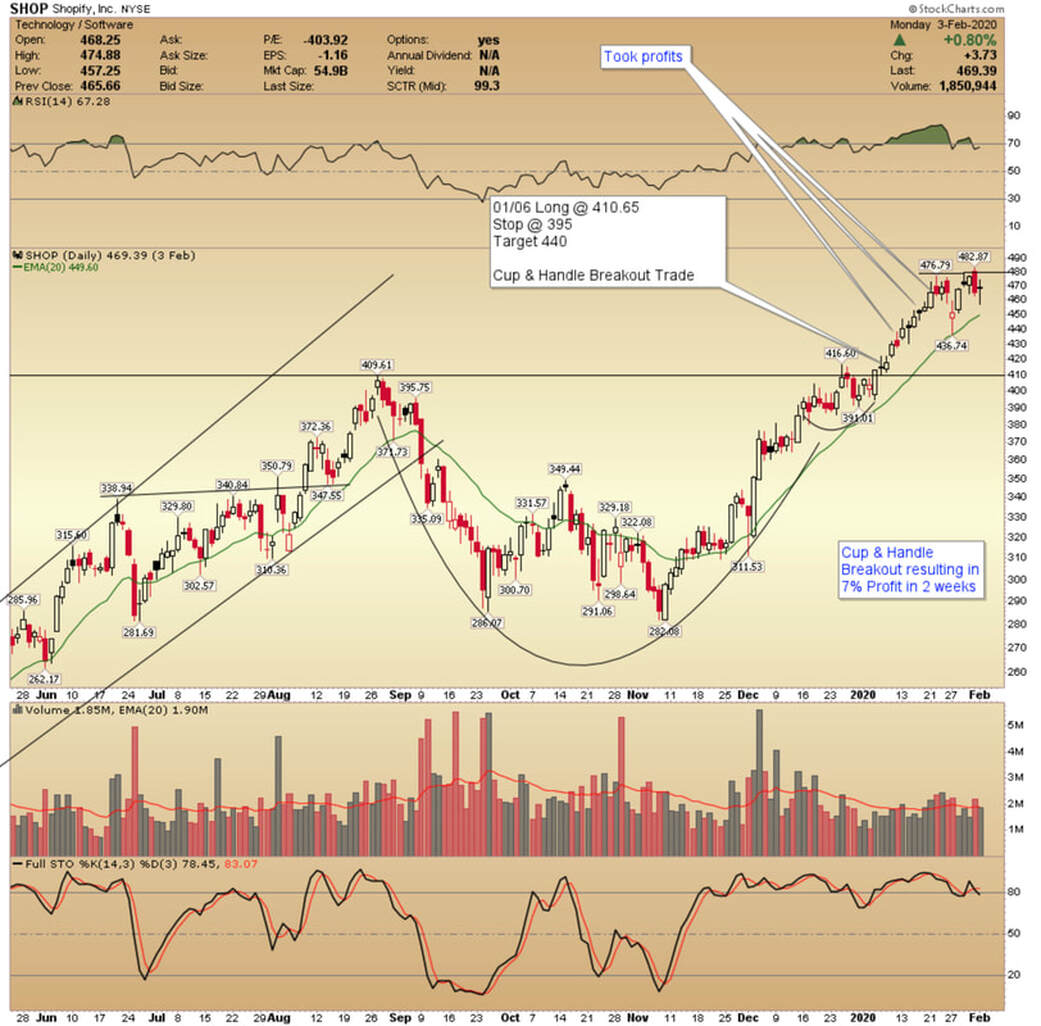 AMZN -> 5.9% Winner
We took this trade as it broke out of a huge inverse head & shoulders base on Big volume. We then took profits as it failed to stay above 1900 level 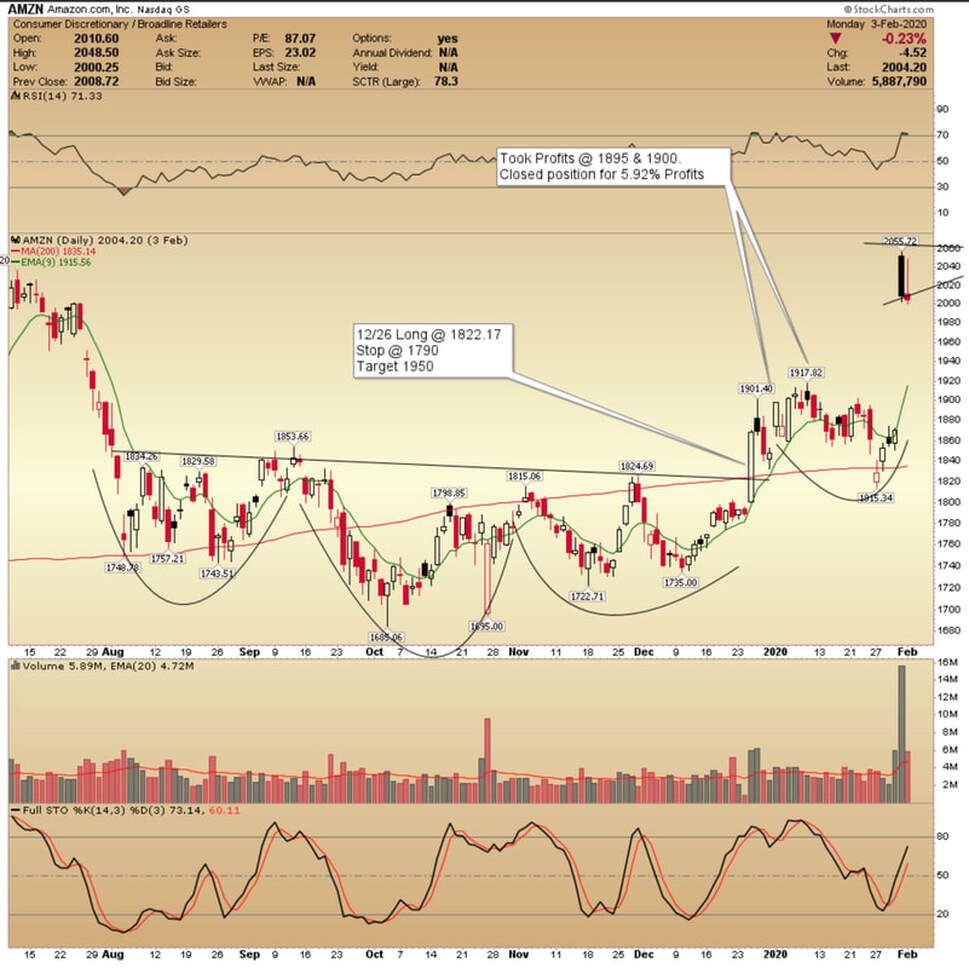 LMT -> 5.9% Winner
We had been tracking this name since 10 days as it was forming this nice looking Cup & handle pattern. It then caught our attention as it broke it's most recent high over 393.54. We got long around 394.70. It gapped up the very next days & made it easier for us to manage this trade. Closed it for 5.9% win. 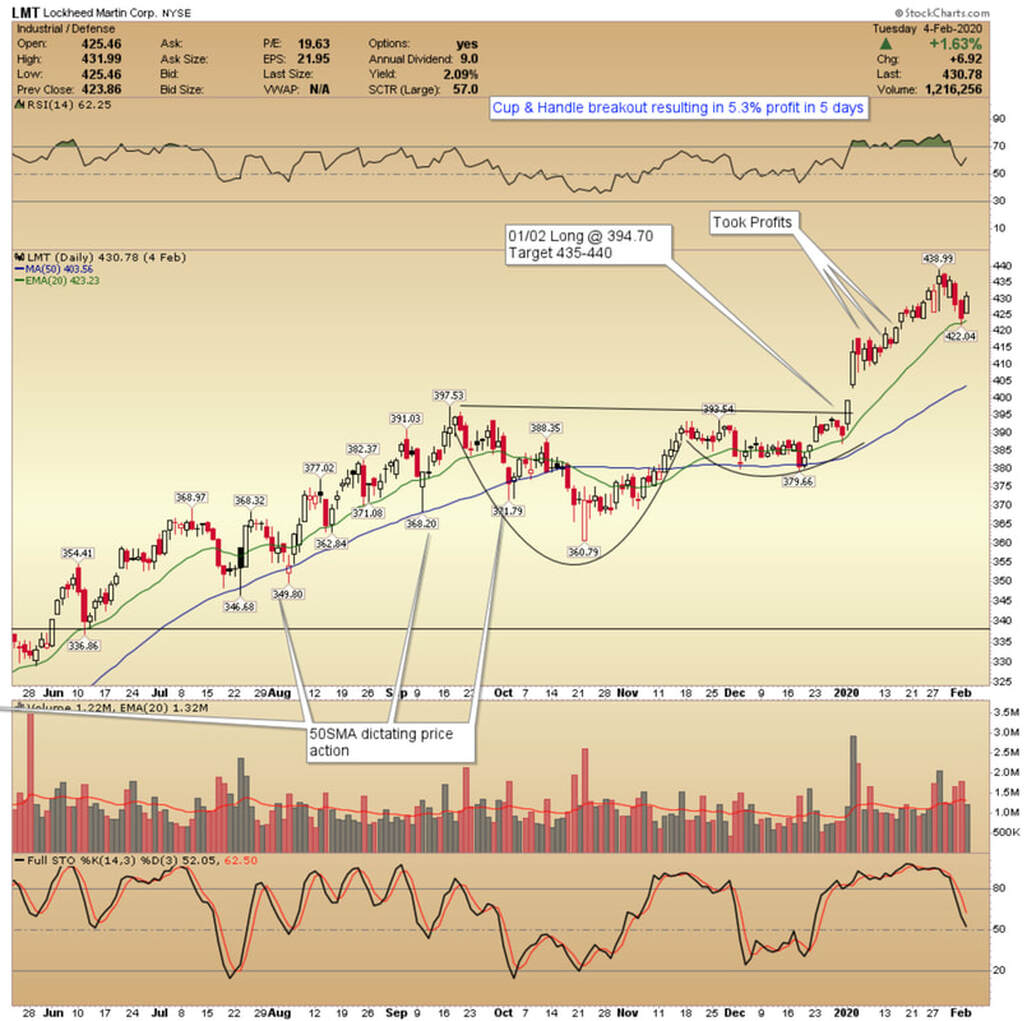 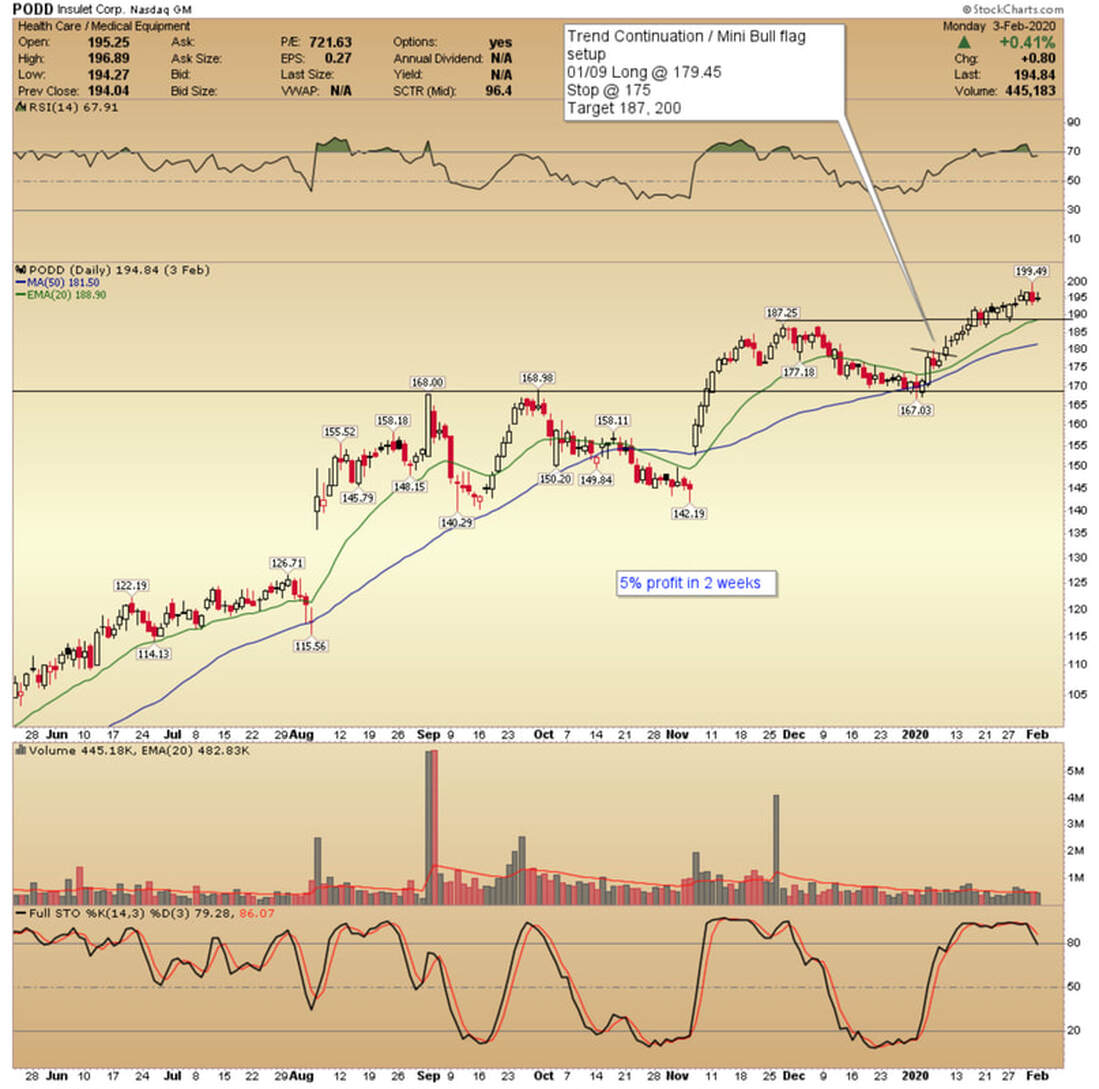 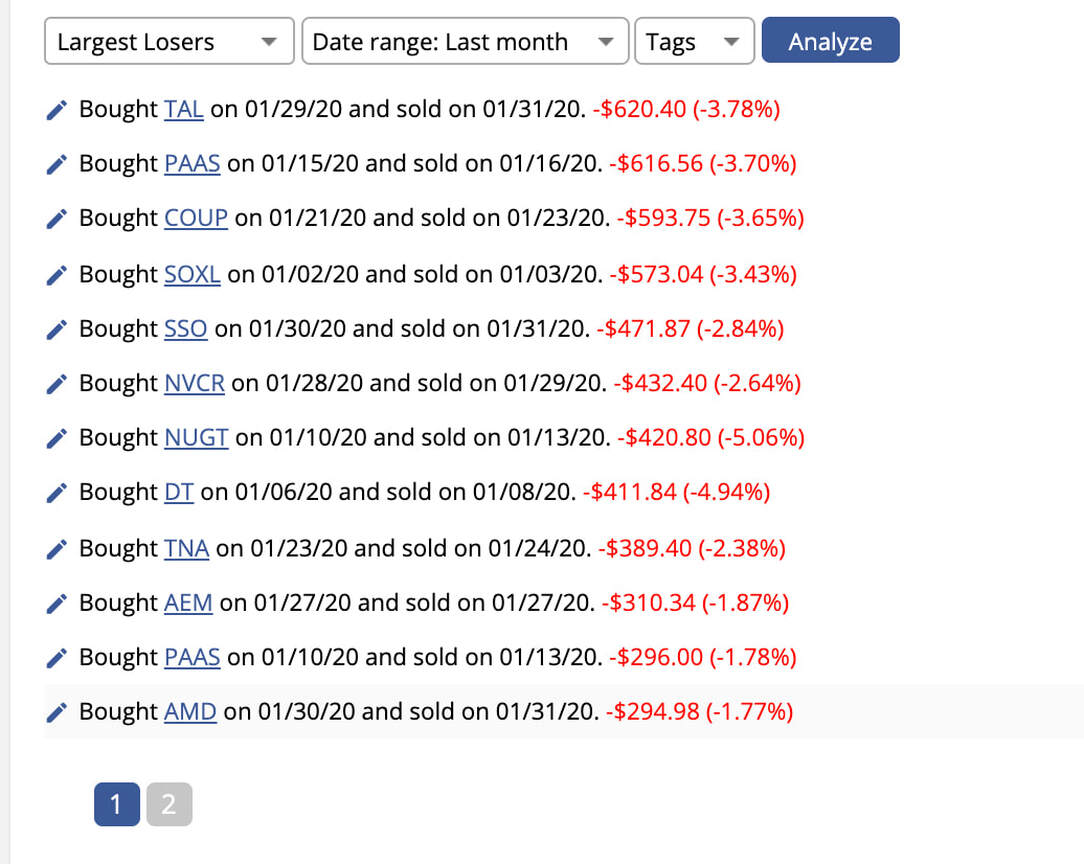 TAL -> 3.7% Loss. Took it as it broke out of this falling wedge & reclaimed 20EMA. A weak market didn't help & we got stopped out the very next day after it gapped down in the morning. Should have waited for a better market before taking this position. 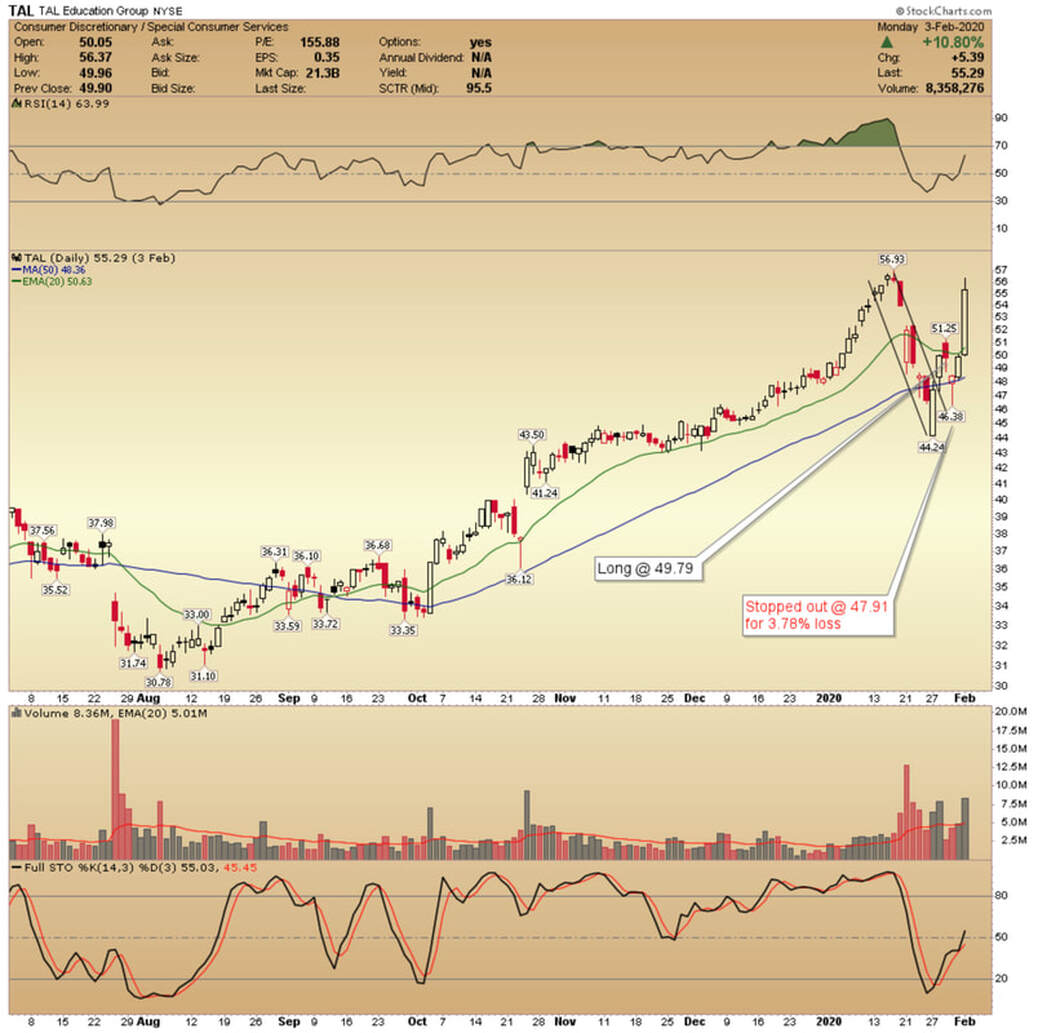 PAAS -> 3.7% Loss. This was a bull flag breakout setup as it reclaimed 20EMA. We got stopped out the very next day as it gapped down at the open. 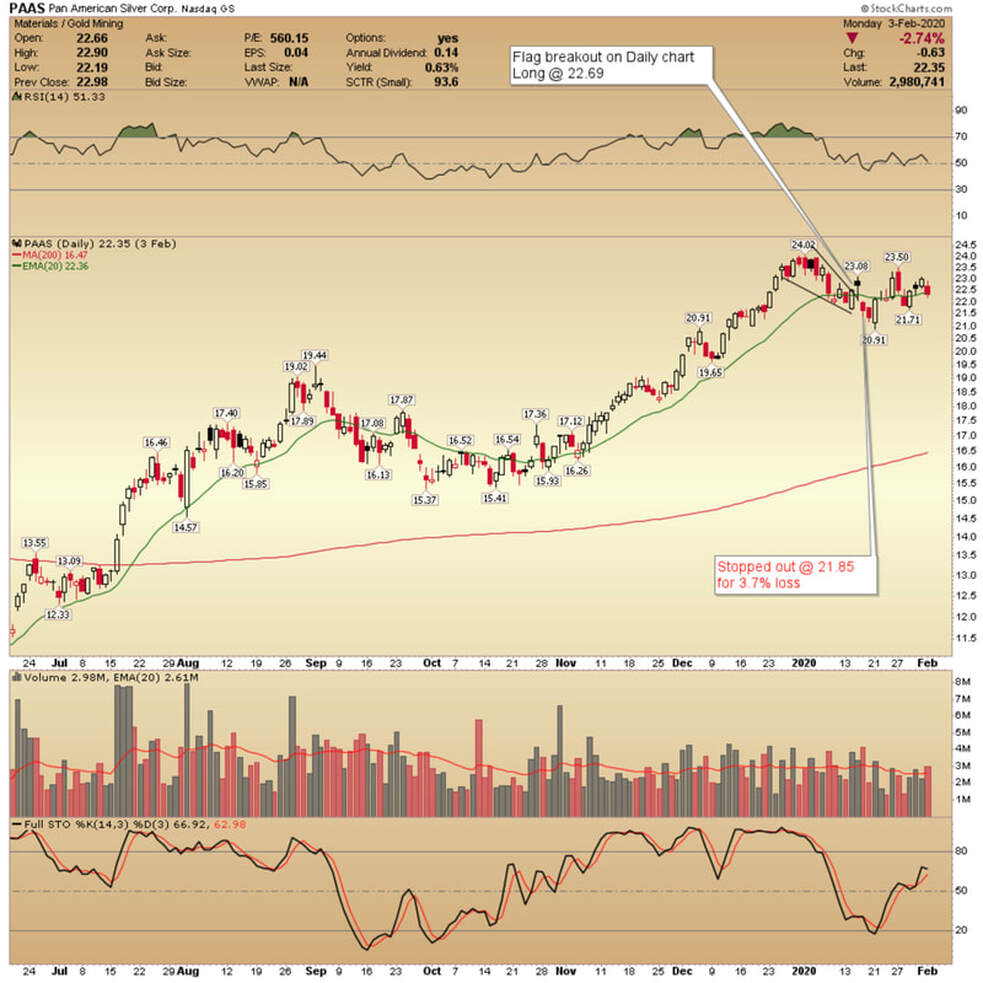 COUP -> 3.6% Loss. Mini bull flag setup near all time highs.  Should have taken it off @ breakeven after it printed a shooting star candle 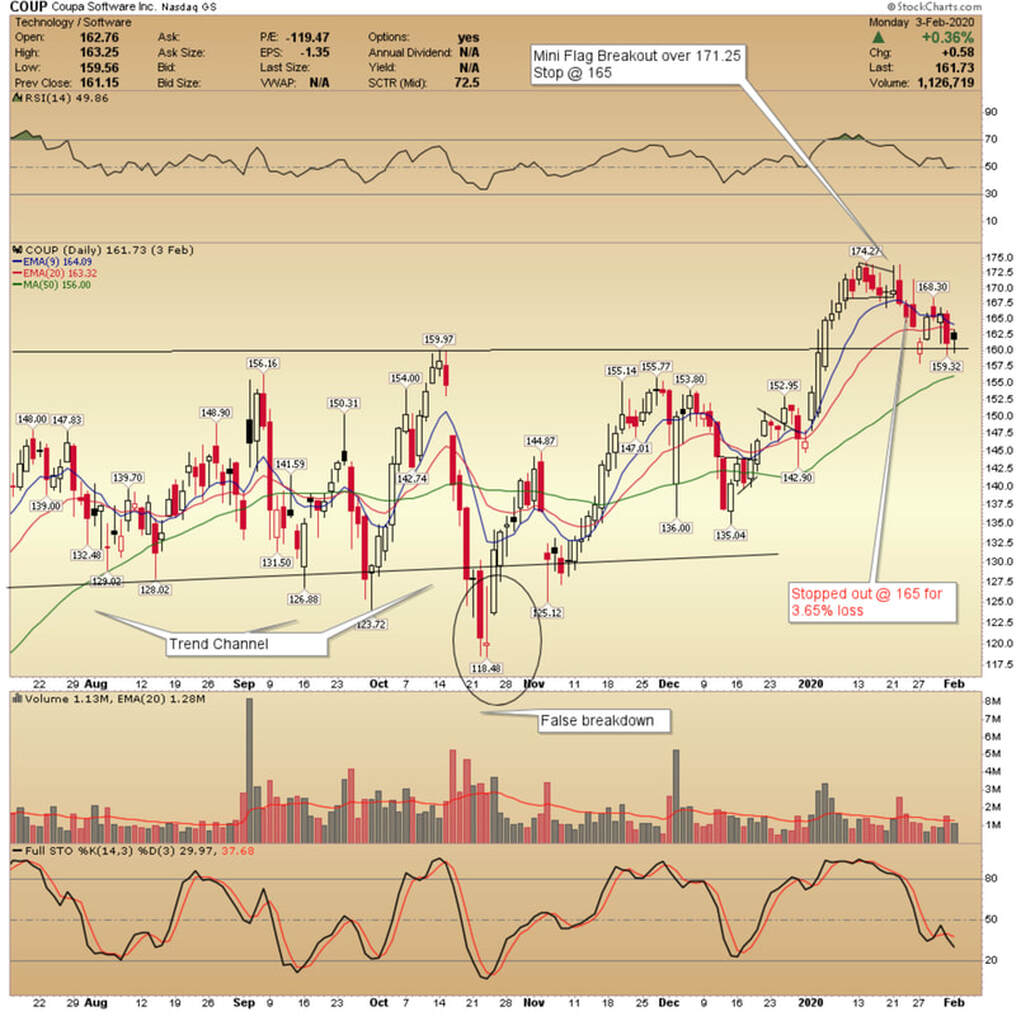 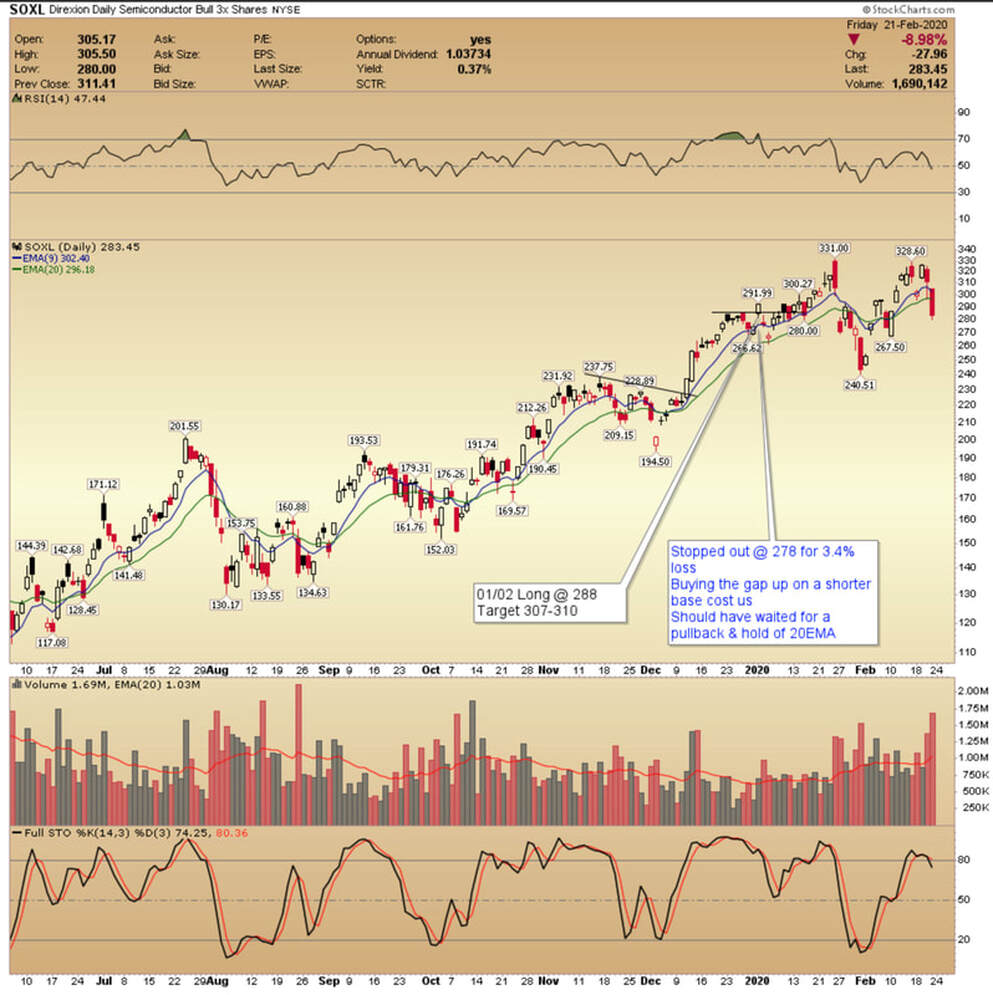 Hope you liked this deep down analysis of our trades for the month. Let me know if you need any other modifications to this format.

See you in the streams
TraderAmogh